skip to main | skip to sidebar

Popular articles by yours truly

Due to popular demand (popular defined as one request
more than none), I am posting links to my articles aimed
at popularizing science through publications in
Resonance, Journal of Science Education and in
Current Science, which among other things is
something like a forum to discuss science policy
in the country.

The first attempt was a 2 part article co-authored with 3
summer students, J. Meeraa, Seema Sharma and Bharti Sharma,
and Ritesh K. Singh who at that time was a beginning
student in our department. This was on 'discrete symmetries'
in particle physics, which also explained in some length the
ideas of particle physics. The two parts are here and here.

The next was a report on the stunning results from
the Sudbury Neutrino Observatory, which was published in
both Current Science and Resonance, authored with Ritesh.
Since they are identical, I link the article to the Current
Science version with certain minor errors pointed in this
erratum.

Then came an article on the 2002 Nobel Prize award to
neutrino pioneers Davis and Koshiba of which I am
sole author.

After a long break the enterprise was revived
in 2005 when a summer student Ekta Makhija wanted to
know what pentaquarks were all about. To answer this
question, I commissioned her, myself and K. Shivaraj to answer
the question. This very tough exercise led to 2 articles
in Resonance and Current Science on the subject.
Note that they are very different, and here is the
link for the Current Science article and
the Resonance article .


This year, along with 2 summer students Chitra Gautham
and Aquila Mavalankar, and Shivaraj and Alka Upadhyay
we started out to explain to the world at large what the
current status of some neutrino experiments were. We
later approached my friend S. Uma Sankar at IIT Bombay
to join us in this enterprise, which has led to a rather
impressive (even if I may say so myself) publication in
Current Science on the subject. The link is given
here.

I guess this does not really fit here, but anyway, I will
put it down. I gave a set of lectures
on Grand Unification at an international school in Kathmandu in 1997,
and it is featured at the reviews section on the Official
Superstring Theory Web-site right here.
Posted by Anant at 12:16 pm 2 comments:

Our work on dipole moments

Years ago, Saurabh Rindani and I had done a substantial body
of work on measuring, or atleast constraining the dipole
moment of tau-leptons using polarized beams. If an elementary
particle were to have a dipole moment, then it would be a
signal of CP violation (C=charge conjugation, P=parity).
CP violation todate has been observed in neutral meson
systems. Returning to our work, it has recently received
the attention of atleast one experimentalist,
see this talk.
Posted by Anant at 11:59 am No comments:

One of the great things about Bangalore is that one can
make some wonderful day trips. One location that we
have liked very much is Shiva Samudram which is about
140 km from here. The location is particularly nice
because one can stop by at the Lokaruchi Kamat Restaurant
for breakfast on the way in and for 'tiffin' on the
way back. Here are pictures of the
'Gaganachukki' falls 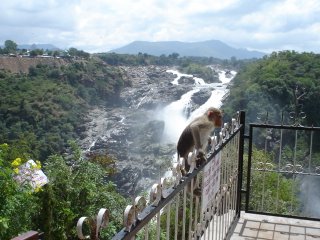 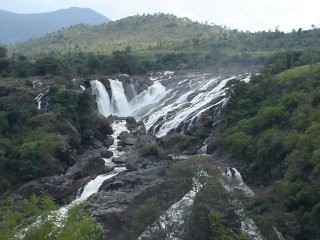 If someone were to come into our building and to ask
"You are Ananthamurthy?", my answer of course would
be "I am Ananthanarayan"! Such a contingency is not
entirely unlikely as the distinguished Prof. U. R. Ananthamurthy
is spending 3 months in IISc, as the Sundararajan Visiting
Professor and sits in our building! His first lecture is slated
for November 2 and is on 'Many Indias...' which I am
eagerly looking forward to.
Posted by Anant at 11:40 am No comments:

Over at Nonoscience , my lecture on Fundamental Particles
and their Interactions is now hosted by Arunn Narasimhan ,
in his guest writers section. You will observe that Arunn is clearly no
mean expert on web-design! Check out how a simple article can look so
fancy!

More seriously, I think Arunn's initiative is an excellent one. With all
these evolving technologies, the more information there is on the web
of a reliable nature, the better it is. I think his efforts are highly
commendable, and I hope that other readers of this humble blog and
his not so humble blog will contribute articles to his blog.
Posted by Anant at 9:32 am 8 comments: 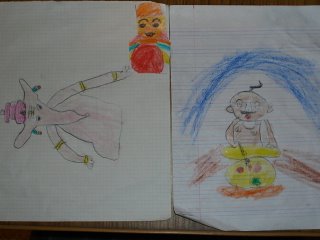 These pictures on blogger are stupendous as seen in the
bird pictures of the previous post. So I cannot resist posting
this picture of pictures by Aparna. But I will get back to
more serious stuff soon!
Posted by Anant at 3:30 pm No comments:

Here are pictures that this friendly visitor allowed
me to take. He or she spent a good five minutes of
quality time with us.

Update: I have the following information obtained on request from Natasha Mhatre:
Its a Java Sparrow, a bird introduced into Sri Lanka, with few records from
the mainland. This has most probably escaped from captivity from Russels
Market. 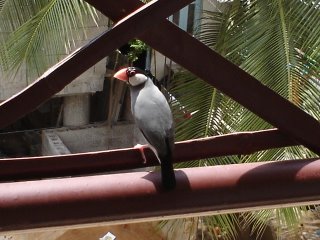 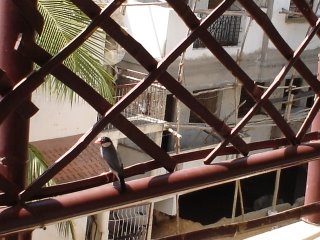 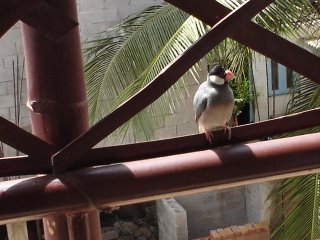 I read a note on Peter Minkowski's page of
the passing of Markus Fierz earlier this year.
The name Fierz is known to everyone in
elementary particle physics due to his
transformations. However, until I met
Peter in 1994-95, I was not even aware that
he was a contemporary figure. Peter, who
had been a graduate student of Fierz's has
linked a pdf file on his home page on the
life and times of Fierz.
Posted by Anant at 8:56 am No comments:

There are frequent discussions at coffee and at lunch
about research and its quality, and how to improve it,
and of course what the role of the individual is. These
are, of course, imponderables and no one really knows
the answers to these questions. It is true that a lot
of great research took place in times of great ferment,
during war-time and during the cold-war, and it is
probably as much to do with socio-politico-economic
conditions as with the drive of individuals that leads
to truly exceptional results. But there really are,
and sadly, no short-cuts.

Many years ago someone forwarded a file containing the
transcript of a talk given by Richard Hamming. I have
never found a better discussion on the subject. Of course,
it is anecdotal and talks about many specific instances
but there is a lot to learn from this talk. There are also
questions that come in about the relevance of a given
individuals work and the circumstances in which he or
she finds himself or herself, the historical times, the relevance
and so on. But there are some inescapable points in this
talk that stick in my mind:


All this, of course is easier said than done.
Posted by Anant at 4:05 pm No comments:

As a peacenik, I am sad to see that there is one more
entrant to the nuclear club. I look forward to a world
where there are no nuclear weapons. Keep dreaming, pal...

On the situation, there is no better article that I
have read than the one by Rahul Mahajan in his blog
in the commentary dated October 9, 2006.
Posted by Anant at 11:33 am No comments:

For what it is worth, let me speculate wildly on the Literature
Nobel prize this year. I think it is going to Salman Rushdie.
Posted by Anant at 12:07 pm No comments:

Over the years that I have been living in Bangalore, I have
visited the lovely temple at Lepakshi, just across the border
in Andhra. However, it seems that relatively few people
seem to know about it. At lunch my friend Ramamurty
thought I was pullling his leg when I said that the way
to get there is drive north towards Hyderabad and hang
left when you see signs for Lepakshi, which is what I
remember it to have always been. Later, I thought I would
check it out on the internet and this is what I found
on this site :

``Lepakshi is a small historic town in southern Andhra Pradesh,
about 120 kms from Bangalore. On the way to Hyderabad from
Bangalore, you have to take a de-tour of about 16kms on the
left to reach Lepakshi. The entrance of the city has a huge Nandi
statue in a small park. From here if you walk about 200mts , you
reach an old temple, built in a typical medival era architecture.
It is Shiva temple with a huge Shivalinga coiled with Naga, in
the open space. The pillars are all well carved and the temple
has multiple shivalingas and pooja is still performed here. The
temple compound is also huge. The place gives the feeling that
the meditations have been performed there for centuries and you
can feel the power of the same.''

Yesterday I also passed on these directions to our friends
the Anil Kumar's who may visit this place the next weekend!
Posted by Anant at 11:59 am No comments:

Returning from a half-day trip to Nandi Hills, as we were nearing
home Aparna pointed out the rising, practically full moon on
Friday. It looked rather special. Later I read on one of the
newslines I subscribe to that it was a Harvest moon that would
appear about 12% larger than some other moons of the year
as the moon was near its perigee. Thank you Aparna!
Posted by Anant at 11:56 am No comments:

I guess the prize for this year to John Mather and George Smoot is
not unexpected for those who have been 'Nobel watchers' and for
those who can grasp the fantastic nature of their achievement.
The observation of the anisotropies of the Cosmic Microwave
Background Radiation through the satellite observations of COBE
is a remarkable story. What impresses me is the perseverence and
the patience of such researchers.
Posted by Anant at 8:09 pm No comments:

Anant
Bangalore, Karnataka, India
Professor & Former Chairman, Centre for High Energy Physics, Indian Intitute of Science Disclaimer: The views expressed here are strictly my own and my employer can in no way be held responsible for them.