skip to main | skip to sidebar

``That means scientists have underestimated the mass of Saturn's rings. They may be two to three times denser than previous estimates, the researchers said.'' This is an excerpt from this story on Saturn's rings.
Posted by Anant at 3:31 pm No comments:

Garment city is without clothes

``Women working in the garment industry face untold misery and the roles expected of them at home by society have only increased their woes, says S Senthalir'' in this article in the Deccan Herald.
Posted by Anant at 11:09 am No comments:

Most Muslims are moderate, but ...

There is an old joke about the Pope landing in Paris and being asked if he was planning to visit nightclubs by the Press. The Pope responded with ``Are there nightclubs in Paris?", whereupon the next day the newspapers blared, ``Pope asks if there are nightclubs in Paris.'' A somewhat less funny situation has arisen with a so-called study of American Muslims which concludes that 1 in 4 young American Muslims say that suicide bombings are alright under certain circumstances. Here is a link to an odious article on the subject. I would like to know what was the question that was asked from which this conclusion was drawn. In fact the very sentence ``American Muslims are generally moderate and well-assimilated, especially when compared to Muslims in Europe and the Middle East.'' is itself quite odious. What does it mean to be `moderate' and `well-assimilated'? Does it mean that one can bull-shit at parties about music and literature and drink beer and hold a cigarette? As opposed to being pious and restrained and adhere to a dress code that one's culture may dictate. An old friend of mine once said that he has many friends who are `progressive' Muslims, and when I demanded a definition, someone else at the table said that that is one that behaves as Hindu! This is the tyranny of the mainstream discourse. In any case, I direct the interested readerof this blog to several articles at Sujaiblog. Another friend once said that the resistance in Palestine would have been no different if the oppressed there had been Milenisian frog worshippers. In other words, the national question there has nothing to do with Islam.
Posted by Anant at 10:27 am 11 comments:

Day trip out of Bangalore 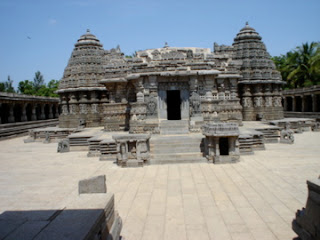 Sometime ago I had written about taking a day trip out of Bangalore to Lepakshi in neighbouring Andhra. It is perfectly possible to do nice days trips out of Bangalore, and I had written about Shivasamudram. Last weekend we did a day trip to the Hoysala temple at Somnathpur, and a trip to the bird sanctuary in Ranganathittu, and visited the Ranganathaswamy temple in Srirangapatnam, saw the Gumbaz which is the resting place of Haider Ali and Tipu, and a whole lot of other dignitaries and the Sangam nearby and got back at a not so unrespectable hour. Here is a picture.
Posted by Anant at 9:07 pm No comments:

I had linked to this story on virgin births in komodo dragons and now there is this story on the same phenomenon in sharks. So the only conclusion is who needs males anyway?
Posted by Anant at 8:04 pm No comments:

One more biography of Einstein

I guess the 100th anniversary 2 years ago of the `Annus Mirabilis' has again set off interest in the life and work of Einstein. There is yet another biography which has been reviewed here. Last year I went to a wonderful exhibition on his life at the Historical Museum in Bern. I am proud that I have atleast one link with Einstein, having worked in Bern for a year in the same department where he had been.
Posted by Anant at 9:37 am 1 comment:

A stunning new discovery has been made. This is one like never before. Here is
an excerpt: ``A report issued Tuesday by UNICEF, the United Nations' children organization, found such stories are not uncommon. It says Iraq's children are "caught up in a rapidly worsening humanitarian tragedy." '' I found this on CNN, that great cheerleader of Dubya and his wars, and am not going to bother giving a link to the story.
Posted by Anant at 9:33 am No comments:

Readers of this humble blog may know that I write off and on for the Lokrajsangathan web-site. Recently it carried an article by me on The Crisis of Human Rights in India. An excerpt from this article reads:
``The issue of Human Rights violation is a particular point of crisis in this system, where the so-called checks and balances of the system are in utter disarray and failure. In order for this state to rise to the fore as an example of `democracy' instituted so kindly by the British colonialists and to accept international acceptability is a problem that the ruling circles in India need to contend with...''
Posted by Anant at 9:28 am No comments:

No words suffice to express one's anguish, helplessness and anger at what happened in Hyderabad today. Why would any one set off a bomb amongst worshippers? It hurts more as it is one's home town. Too close to the heart....
Posted by Anant at 9:32 pm 1 comment:

Lecture at the Planetarium

I was pleased to give a lecture on elementary particle physics yesterday to about 30 college students at the Bangalore Planetarium. There is a written version of a talk I gave a couple of years ago, which is practically current. You may get hold of it here. It was also featured as a guest article here at Nonoscience.
Posted by Anant at 2:50 pm No comments:

From this article posted on CNN, one learns that:

``A hazy ring of dark matter spawned by a colossal cosmic crash eons ago offers the best evidence to date that vast amounts of this mysterious stuff reside in the universe, scientists said Tuesday.''

I guess the previous evidence comes from the flat rotation curves of galaxies. Here it is the collision of clusters of galaxies!
Posted by Anant at 2:46 pm No comments:

I have always wondered why eetiquette is so bad. It must be because of blind imitation of what the Americans do. It seems that they long ago stopped beginning an e-mail with "Dear Gruesome" or even "Hi Ghastly" and instead start off with "Plugugly:" and break the line or simply "Plugugly" without even the colon, or in the worst case simply start off with the message. Now this diease has spread even to the comments section of blogs. I, on the other hand, will resolutely oppose such barbarianism and will always start with atleast a Hi, or a Dear.
Posted by Anant at 9:49 pm 5 comments:

I will be going a little easy on blogging as I have to give two talks next week. The first is the result of my volunteering to give the very first talk in the newly founded journal club at our Centre, by my colleague Sudhir Vempati. The second will be at the Bangalore planetarium where I will give a blackboard talk at a summer programme for summer students. So, goodbye for the moment.
Posted by Anant at 8:28 pm No comments:

Hubble Space Telescope will have a successor

Here is a link to an article entitled Crash Course, which mainly deals with the status of elementary particle physics and the upcoming LHC experiments. Of the many things I liked in this article is the following:

``Meanwhile, physicists are already lobbying for the next generation of machines. The plan for the International Linear Collider, which, as its name suggests, would be built in a straight line rather than a ring, calls for smashing electrons and positrons together at the midpoint of a tunnel twenty miles long. According to the Web site that has been set up for the I.L.C., the hypothetical collider’s design would allow for “an upgrade” to a thirty-mile-long machine “during the second stage of the project.” ''

I am happy to say that along, almost entirely with Saurabh Rindani I have already spent a good deal of time working on ways of looking for new physics at this facility
Posted by Anant at 7:45 pm No comments:

I was saddened to learn of the passing away of Maurice Jacob, a well-known theoretical physicistm who had led the Theory Group at CERN in the 1980's. An eloquent obituary by John Ellis is here
Posted by Anant at 7:42 pm No comments:

Life is cheap in the Orient

[This is the nth time I am trying to put this into the post; maybe something is wrong with blogger? After failing (n-1) times with internet explorer, I am now trying with safari]

There is an old quote due to General Westmoreland trying to justify the indiscriminate bombing in Vietnam, where he says that life in the Orient is cheap. I want to use it to `understand' what happened yesterday in Madurai: how else can one understand why someone would throw a petrol bomb into a newspaper office with lots of inflammable material and knowing that there would be many persons inside? How else can one understand setting a bus on fire, knowing that there are some college girls insideas was done in Dharmapuri some years ago? No words can describe such atrocities...
Posted by Anant at 12:42 pm 1 comment:

Via Not Even Wrong, the well-known blog of Peter Woit,
``...a quote from Leon Lederman:

If I occasionally neglect to cite a theorist, it’s not because I’ve forgotten,… It’s probably because I hate him.''
Posted by Anant at 3:37 pm No comments:

``A massive star about 150 times the size of the Sun exploded in what could be a long-sought new type of supernova, Nasa scientists have said.''

Read the rest of the story here.
Posted by Anant at 7:40 pm No comments:

Via Nonoscience I came across this article on the 300th birthday of Leonhard Euler, the great Swiss born mathematician who spent possibly the larger part of his life in St. Petersburg. I am told that published 866 papers! How is that for a record? And what a great guy, considering that he was blind for last several of his years.
Posted by Anant at 9:43 pm No comments:

``She was rumoured to be the world's most beautiful woman in her time.

Nefertiti, Queen of Egypt, was the co-ruler of her country in the 14th Century BC. Today, the bust of Nefertiti (whose name literally means "a beautiful woman has arrived") has pride of place in the Antiquities collection in Berlin's Altes Museum.''

Read about the campaign to get the bust back to Egypt.
Posted by Anant at 9:39 pm No comments:

Here is the link to the obituary of von Weizsaecker. His name is well-known for the famous semi-empirical formula for the masses of stable nuclei, which works very well except for magic numbers and some other peculiarities. His brother Richard was President of Germany before and after the fall of the Berlin wall. He was involved along with Werner Heisenberg with the German bomb project, a saga that has never been satisfactorily explained.
Posted by Anant at 9:36 pm No comments:

Here is a newitem from BBC about the stunning new Buddhist paintings in Nepal. The picture that is featured here is reminescent of the Ajanta paintings. Hope to be reading more about such finds.
Posted by Anant at 9:33 pm No comments:

Anant
Bangalore, Karnataka, India
Professor & Former Chairman, Centre for High Energy Physics, Indian Intitute of Science Disclaimer: The views expressed here are strictly my own and my employer can in no way be held responsible for them.